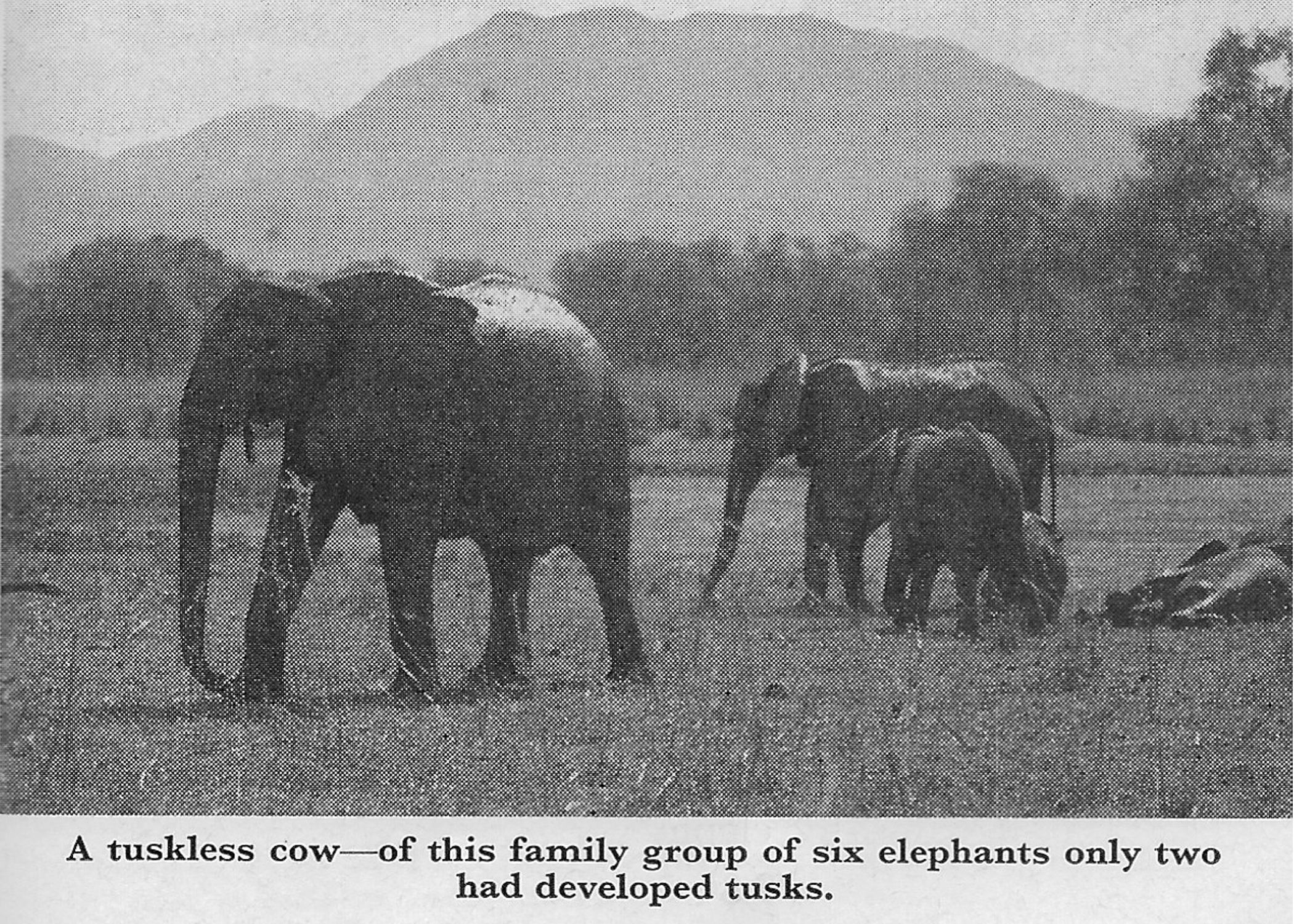 The March 1966 edition of African Wild Life, the official magazine of the Wild Life Protection and Conservation Society of South Africa, features an interesting article about tuskless elephants in the Zambezi Valley.

This survey was the first research into the tuskless elephant phenomenon.

The Mana Pools Game Reserve is situated in the Zambezi Valley, about 40 miles east of Chirundu. The game reserve covers 150 square miles and extends 25 miles along the Zambezi River. It is flanked by the Nyakasanga Rekomitje Controlled Hunt Area in the west and the Sapi Controlled Hunting Area in the east. Extending along most of its front with the river is a two-mile-wide strip of floodplain, characterised by tall Trichilia emetica and Acacia albida trees.

In the dry season, many pools remain scattered over much of this region.

South of the floodplain is a stretch of mopane woodland of similar width, and this gives way to thick low jessiebush. The pools attract numbers of game as the dry season progresses from July onwards.

The most abundant species are impala and waterbuck, but large numbers of buffalo, warthog, zebra, elephant, kudu and lesser numbers of other species are also present. The elephant generally occur singly or in small family groups (often a cow accompanied by several offspring of various ages).

As pans in the jessiebush and mopane areas begin drying up, the elephant start concentrating in the floodplain area from July onwards. Few appear large or fully grown, and an unusually high proportion fail to develop tusks. It was the object of the present survey undertaken by five field workers to obtain some records of the proportion of tuskless elephant in the area during the period 8-18 July 1965.

Observations were carried out on foot patrols. The composition of each elephant group encountered while walking through the area was noted. An attempt was made to cover the 25-mile width of the reserve from east to west during the 11 days spent there.

Most of the time was spent on the floodplain, where elephant were more numerous and observations easier to make. Observers generally set off from the camping site on the Zambezi River in two pairs soon after sunrise and spent the whole day in the field.

To cover the eastern part of the reserve, a sub-camp was established near the Chichembe River for three nights.

The accompanying table contains detailed records of the composition of each group of elephant encountered.

They have been roughly divided into the age groups: adult (full-grown or nearly full-grown), immature (roughly half-grown animals) and juvenile (in practice, those too young to have visible tusks).

The reserve has been divided into three areas, each roughly 8 miles broad, for comparison of results:

1. The area west of the campsite and main entrance road

2. The central area cast of the campsite and including the Nyamatosi area,

3. The eastern area between the Nyamatosi and the Sapi River.

Of the 150 elephant, on which it was possible to determine whether tusks were present or not (excluding juveniles), it found that 15 or 10 percent were tuskless. Considering that tuskless elephant are rare elsewhere in Africa, this figure is significantly high.

All told, eight groups containing tuskless animals were observed and in three of these, more than one tuskless individual was present.

In one herd (5), 6 tuskless elephants and only 2 with tusks were seen.

Of the tuskless elephant 6 were classed as adult and 9 as immature. The latter figure is 23 per cent of the total number immature animals recorded, which suggests that the proportion of tuskless elephants may be increasing.

However, the possibility that some of the young tuskless animals may develop tusks before maturity should be borne in mind.

There is no evidence that a particular group containing tuskless individuals was recorded more than once.

The only two groups with similar composition seen in the same area were Nos. 3 and 18.

It was not possible to cover the whole area of the reserve equally well in the time available, and most time was spent in the part between the camping site and the Long Pool, which was the most accessible.

The highest concentration of elephant was found at the western end of the Long Pool.

The only elephant seen in the eastern portion of the reserve were on Chikwenya Island, though there were plentiful signs of their presence on the mainland.

Results also provide a record of the herd structure of the elephant population in the area.