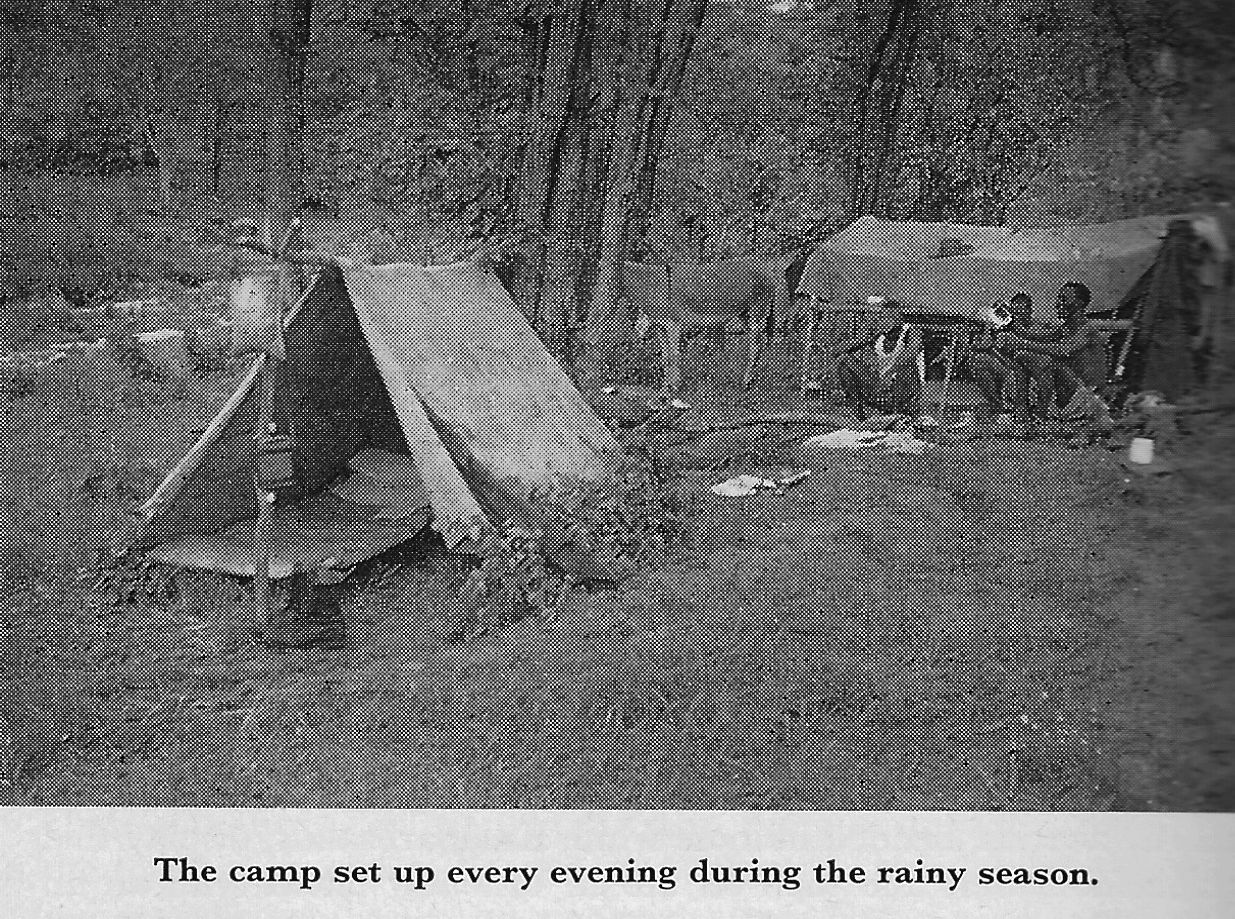 This delightful story was published in the March 1966 edition of “African Wild Life”, the official magazine of the Wild Life Protection and Conservation Society of South Africa. Are elephants capable of “toolmaking”?

Elephants Do Think. By James A. Gordon.

To each man, his own way of relaxation and enjoyment, but for me, there is nothing more refreshing and rewarding than a long walk in the bush. By “the bush”, I mean open grassland, thornveld, woodland, riverine thicket and any other variation of vegetation where man is the intruder, and the natural denizens are a variety of evasive four-footed creatures.

Of the breed of mankind who love the bush, I am one who has enjoyed the excitement of tracking and hunting, of waking long before dawn to see the smoke of Bushmen fires form individual smoke clouds ten feet up in the crisp morning air.

I cannot adequately describe what an enduring joy are the days when leafless grey-hued bushes and trees, although without rain for six months, sprout the freshest of green spring shoots; when gnarled and thorny acacias, bedded in loose white Kalahari sands, display their colourful flowers and then fill the air of lonely places with an unforgettable fragrance for miles and miles.

I have wakened in the moonlight, crawled from my blanket, and watched the trumpeting elephants splashing and drinking in a nearby pan; and when they have departed, listened to the chirrup of crickets, the soul-depressing call of a wandering hyaena, and then gazed with awe and wonder at a sky that had form only in its star-studded depths. Such things and many more make the bush, to some people, a place of unparalleled recreation.

What I am going to relate is one of the more interesting discoveries I made during the years I spent in the bush:

In November 1956, I was a Game Warden in Wankie National Park (Rhodesia) in the days when the only way of doing a patrol was on foot or horseback. However, ill-luck had stricken my few beasts of burden.

“Sargeant” my horse, had been killed by a lion at Gomo Pan and later, on another patrol “Bataan”, his pal, my best pack-mule, had died from veld poisoning.

Now in the middle of a patrol, and in the company of African rangers Muzia, Mjoyci and Nani with the pack mules Bob and Whiskey (my Bushman pronounced this “Whissik”) we walked the short distance to a lonely oasis close to the Panda-Matenka.

There had been no rain for some time, and it was a torrid day. The only animals we had seen were a few elephants, warthog and duiker. We had also seen a widely dispersed flock of woolly-necked storks.

The oasis, called Ngwasha, was on this occasion merely a slimy green puddle at the bottom of a depression seepage water from the sands. Here I decided to stop to give the mules a short rest while I had a cursory look about the place.

The first and only things that really held my attention were five holes on the slope some ten paces from the water. On examination, I found each to be an excavation just too small for me to insert my head and drink from the clear pool of water at the bottom of the enlarged cavity, 1 1/2 feet below the opening.

This, too, was clearly seepage water from the sand, but what had made the holes was a puzzle until I had pondered awhile and remembered what an old African ranger (Solomoni) had said, squatting in the flickering light of a campfire one evening.

We were discussing the animals we had seen and the things they do, and I remembered his remarks concerning such holes, which he said the elephants had made.

He also told me another remarkable thing about them which I found difficult to believe at the time, but which I later found to be true.

About two years later, I was a Tsetse Field Officer in charge of the Ghona-re-Zhou (place of the elephant) area, an enormous expanse of untouched virgin wilderness bordering Mozambique south of the Lundi River.

I had as part of my labour force a gang of Africans making the first roads in the area. The terrain here was quite different from the Kalahari sand regions, just as dry, but instead of having an overlay of sand, it was eroded by wind and water, leaving large areas of almost lifeless soil with only small pockets of comparatively good vegetation. Elsewhere it was stunted mopani and thornveld, interspersed with poor grass.

It was about mid-winter (cold nights, hot days), and the annual fires had burned all the grass where it was not too sparse and had scorched all but narrow fringes of riverine vegetation. The road party was many miles from the river, and water was a problem.

At that time, I had a local headman working for me, “Fishani”, who had wandered about the bush in this region as a youth. He said that the solitary plateau where our road was passing had once been the site of a small native village.

The people had left when the village spring had dried up. There was other water in the area, but it abounded with so many elephants, buffalo, lions and other dangerous animals that it was hazardous to visit the springs and pools on the other side of the plateau.

Later I found how true this was and remember how a vicious cow from a small herd of elephants resting in the shade near a pool made our lives miserably uncomfortable by chasing us away.

One morning we crossed the fresh spoor of elephants and followed them along a faint path downhill, Fishani leading, and Juao bringing up the rear.

Soon the way became two well-defined elephant paths, and then, pushing through a thicket of combretum, we scrambled down to the dry sandy bed of the upper Benjee watercourse.

We had just turned to follow the spoor “upstream” when we came across a place where the elephants had scraped the sand away to a depth of about eighteen inches.

I pulled, and out came a long wide strip of bark, chewed loosely into a rough ball: an elephant has used this as a plug to block the hole beneath.

I could not touch the bottom of the hole, even with my arm inserted to the shoulder, but with a stick that Juao brought me, I easily felt the bottom, and it came out dripping with water.

Only a short distance away on the far bank, I saw the baobab with a long white gash, where jumbo had prised away the bark before chewing it into the shape of the rough sphere he had used to “cork” the hole.

Again I recalled the words of old Solomoni; “Nyamandhlovu” (elephant) when the day is hot, and water is distant or scarce, will, on smelling water just beneath the surface, dig with his feet and trunk to get it.

“Sometimes, Inkosi”, he went on, “the elephant will use the tip of his trunk to laboriously grub a hole in the sand, often kneeling down to go as deep as possible. Then, when his labour is done, and his fiery thirst has been somewhat quenched, he does not always just walk away.

He will take a bunch of leaves and grass, or even a parched ball of elephant dung, and firmly close the entrance to his hole, concealing it finally with sand; otherwise, the hyaenas, warthogs, and other animals, would try to get at his water, and in their unsuccessful struggle they would destroy his hole” He concluded “When elephant returned for water, he would have to dig again.”

Now I believed everything that Solomoni had said, for I had seen the thing with my own eyes. The fact that an elephant will dig a narrow hole for water, and then make a tool a plug to secure it is but one of the many fascinating things I had the pleasure of learning in the bush.