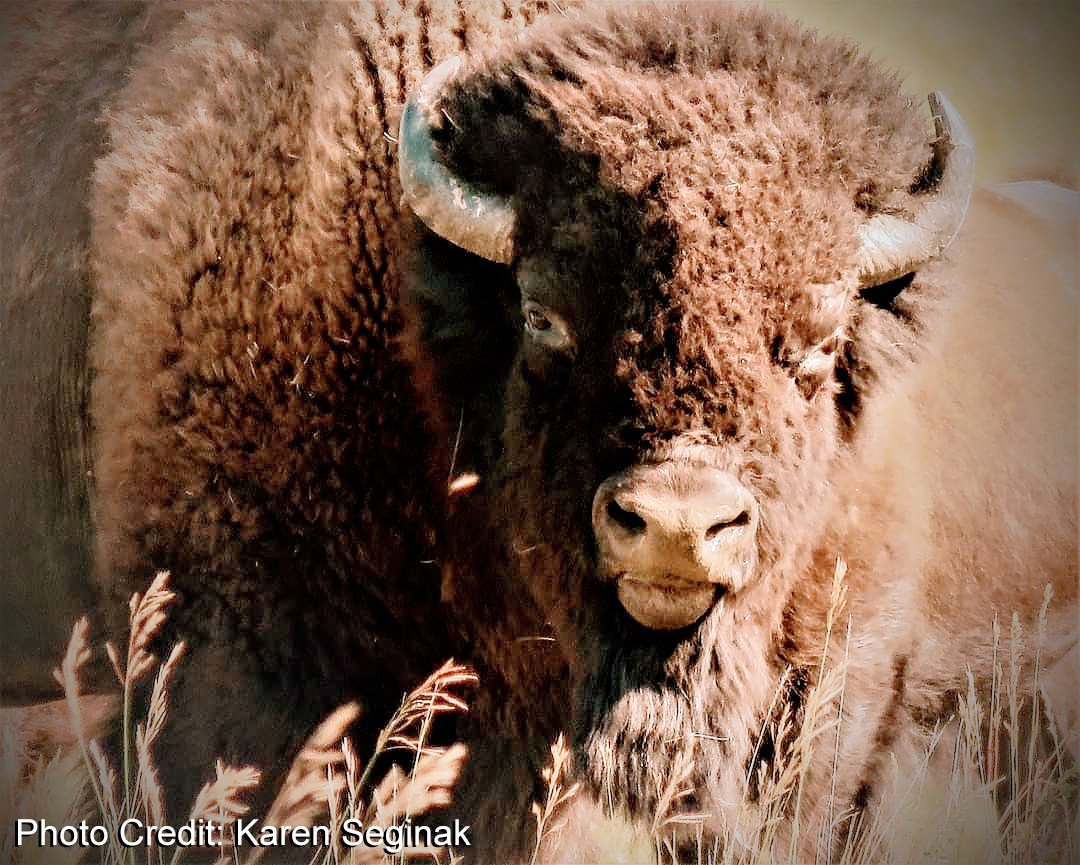 Plains bison, prior to the mid-1800s, roamed North America’s then-vast grasslands in large herds, in the estimated tens of millions of individuals. They were not only keystone species in the Great Plains ecosystems they inhabited but also important subsistence and cultural resources for the indigenous peoples who shared their ranges.

As newly arrived human immigrant populations (primarily from Europe) expanded westward, plains bison were increasingly more heavily utilized, destroyed en masse in campaigns against indigenous peoples, had their grassland habitats converted to agriculture and fenced for domestic livestock, and probably suffered from disease outbreaks as well. By the early 1880s, their populations were so diminished that the last sizable, free-ranging bison hunts occurred in the Dakotas.

In one of these final hunts, two men named Fred and Pete Dupree caught five calves along South Dakota’s Grand River and raised them on their ranch. By 1901, when Pete died, these five had produced a herd totaling 83 head. Scotty Philip, a rancher from the Fort Pierre area, purchased them and drove them via horseback to his ranch. In 1914, Peter Norbeck, then lieutenant governor of South Dakota, bought 36 head from Scotty and moved them to the grasslands that would eventually become Custer State Park.

This park, South Dakota’s first, was established in 1919 when automobiles became more prevalent after World War I. The park’s founders created it not just as a wildlife reserve but as a way to protect one of the most scenic parts of the state that could attract motorists to view wildlife from their cars and to bring in tourism dollars. And that it did, as currently, two to three million people visit the park annually.

And the bison flourished there as well, as the original 36 progenitors moved there in 1919 quickly became a herd of over 2500 animals by the 1940s.

Although Custer State Park is South Dakota’s largest, at 71,000 acres, only 18,000 acres are grasslands suitable for supporting bison. And these habitats must support a variety of other large ungulates (elk, deer, pronghorn) and smaller species dependent upon healthy prairies. Winter is the most limiting season for resource availability in this northern Great Plains ecosystem. Range studies show that in an average, non-drought year, about 1000 to 1100 bison is all this mostly open range land can sustainably support during that season.

To achieve that management goal, a buffalo roundup is held the last Friday of every September, with a subsequent auction to help reduce the herd to sustainable numbers. It’s an important, cherished part of South Dakota history that currently attracts over 20,000 spectators from all over the world. A critical management tool turned into a high-profile public tourism and photography event complete with art shows, outdoor meals and vendors, educational displays, and opportunities for visitors to view some of the processing of animals for the live auction.

Before 1965, however, this was not an annual event, and roundups (no auctions) occurred only when needed. The excess bison were processed in a meat packing plant located in the park and were an important source of meat, especially during World War II, when beef was restricted and rationed. In 1940, the herd was also infected with brucellosis, which meant that no live animals could be sold, only processed ones. In 1966, however, live auctions could begin when the herd achieved brucellosis-free status. In a timely coincidence, bison meat began gaining popularity with consumers in the 1950s. A good market emerged in the 1960s, wherein those wishing to become bison farmers now needed stock.

Until 1974, both live and processed bison were sold. Since then, it has been a live auction only and is the longest-running annual, single-source production sale of bison in the world, from one of five main genetic stocks used to repopulate bison continent-wide. About 200 to 500 female and young male bison are sold yearly, primarily to supplement or start privately owned herds. In 2021, the auction raised over $384,000 for the park, but this was a low figure because of extreme drought conditions affecting buyers. The money raised supports park operations such as fencing, range management, building corrals, noxious weed control, timber thinning, and facility maintenance.

The roundup is also a chance to assess herd health, vaccinate animals, and do pregnancy checks. Young bulls are fertility tested, and all animals receive ear tags. Sixty highly coveted rider positions are offered via application wherein members of the public bring their horses to assist the park employees in the five-mile bison drive to the corrals. Governors join in as well, and there is a distinct spirit of the old west draw to the affair, alluring to many tourists, some of whom book specific viewing packages with tour companies. This important management tool, now turned into a multi-purposed spectacle, also recently garnered a USD 4 million donation from charitable trusts, trustees and the state legislature, which built a bison center educating visitors about their management and history.

Bulls older than two years old are never intentionally handled or part of the roundup, as they are potentially very dangerous. They are very rough on each other, too, which limits their breeding potential to about ten years of age and poses a potential risk to park visitors. So, to remove these old bulls, Custer State Park issues a very limited number of trophy hunting permits, which is another way to manage and raise necessary funds at the same time correctly. In 2021, 1638 people applied in a lottery draw system for a chance at only 8 permits. A non-trophy hunt is also held for excess cows and bulls less than ten years old. This hunt received 1195 applications for only 15 licenses. A guide accompanies all hunters to ensure the correct animals are chosen, with their ear tags providing reference to their age and herd health statistics.

A current amendment to a Department of Defense bill requires the government to purchase up to two million pounds of bison meat annually from native tribes and organizations who now maintain their buffalo herds to feed military personnel. It might add even more value to these bison auctioned off annually if passed.

It is said that history has a way of repeating itself. The bison of Custer State Park and the necessary management actions to ensure their sustainability seem to at least be reaffirming the fact that bison were once, and are still, valuable, renewable natural resources in economic, cultural, and subsistence ways, that we should value and promote, in all ways that we can.