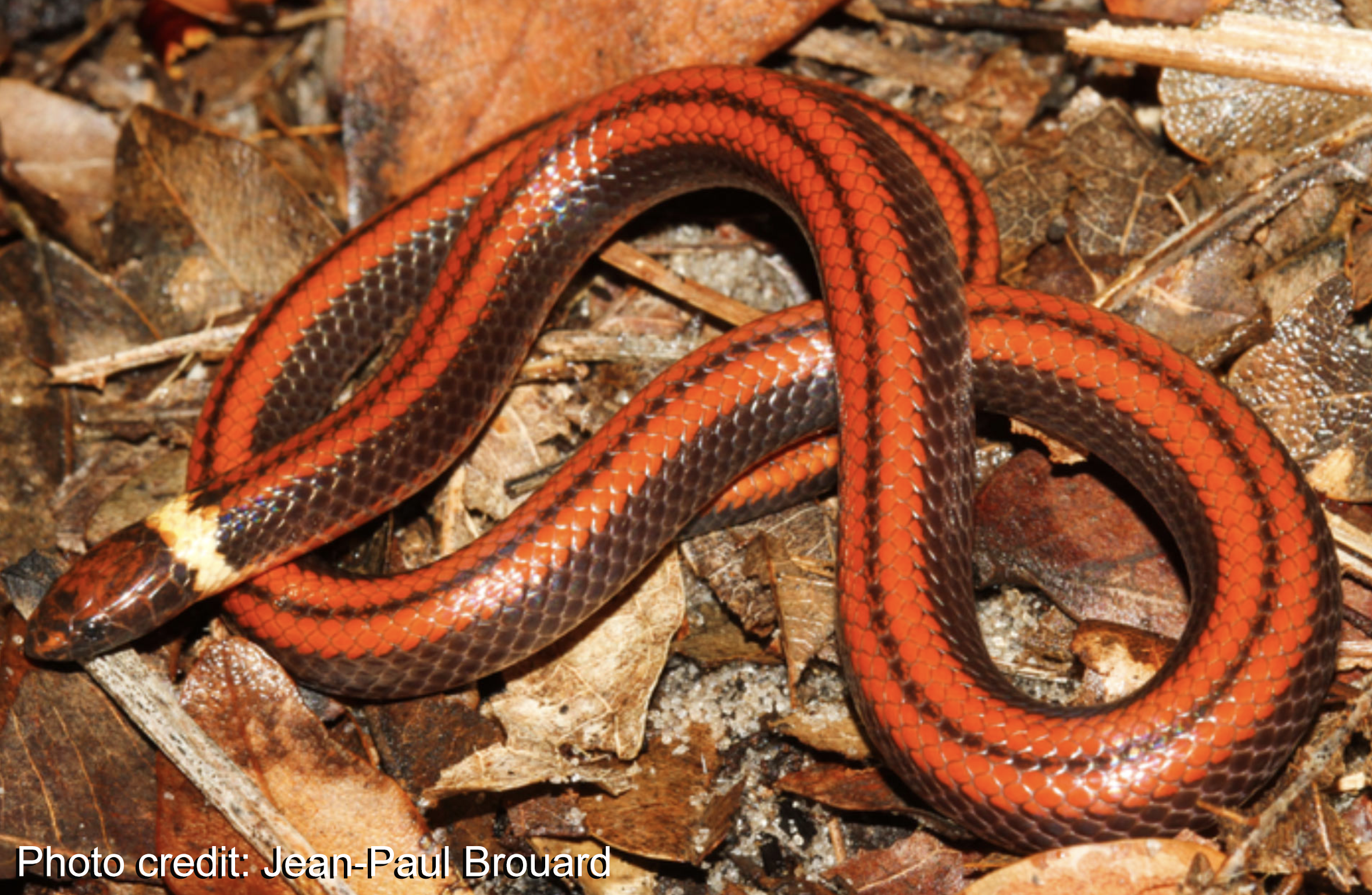 On a weekly, sometimes even daily basis, the news and social media are full of gloom and doom stories forecasting the sixth mass extinction, increasing biodiversity losses, and accelerating land conversion rates. But intermingled with those stories are tales, too, of new species being discovered, often in places that tragically do not receive the same level of global concern as more well-known sites do. And often involving less “charismatic” species that are especially vulnerable due to occupying smaller ranges.

Recently, one such discovery was in the South American country of Paraguay. A beautiful red, black and yellow, non-venomous burrowing snake was encountered when researchers from Para La Tierra, a local conservation NGO, were conducting herpetological surveys on the privately-owned property known as Rancho Laguna Blanca. This novel species of snake, described from three individuals, is now known to occur in only one other location, also in the department of San Pedro, but 90km away. The snake was named Phalotris shawnella, with the species portion of the nomenclature being a combination of the names of two children born in 2008, the same year Para La Tierra was founded. Due to its small, estimated area of occurrence, its severely fragmented range, and continuing decline inferred from the decreasing extent and quality of its habitat, this snake is considered endangered even though just now formally known to science.

Multiple recent news stories about this snake’s discovery rehashed the very basic set of details in a rather bland, uninspiring manner. But a few articles very briefly mentioned two critical details that should have been expounded upon, and they are that Rancho Laguna Blanca currently has no formal protection for the remarkable nature it contains. It has been for sale since 2015.

The property is relatively small, consisting of 804 hectares of land surrounding 150 hectares of lake. But it is massive in its importance for maintaining biodiversity in Paraguay specifically, South America in general, and, ultimately, globally.

Rancho Laguna Blanca is situated in a transition zone between two of the world’s most rapidly disappearing habitats – the Cerrado (the great South American savanna, considered the most biodiverse savanna in the world) and the sub-tropical humid Atlantic Forest (over 85% of which has been deforested). The lake itself may be the only true lake, geologically speaking, in the entire country of Paraguay, and it possesses exceptional clarity and purity. Not only is it inherently important to the nature and hydrology of the area, but since Paraguay is a land-locked country, it is also perfect for beach tourism.

In 2010, Rancho Laguna Blanca was declared a Reserva Natural. During that time, Para La Tierra conducted species inventories, resulting in impressive findings. The reptile list generated was twice as long as other protected areas, including national parks that were ten times greater in size. Over 100 species previously not found in Paraguay were confirmed on this property, and two species new to science were described. Range extensions were established for some species, and some poorly known species were confirmed as being more common than previously thought. A whopping 36% of all the reptile species known to occur in Paraguay were also documented on this not so large parcel of land, along with confirmation that the green anaconda, critically endangered in Paraguay, breeds here.

And it’s not just reptiles that depend upon this land. Forty-two percent of Paraguay’s birds utilize this area, many of whom are threatened, prompting the NGO Birdlife International to designate Rancho Laguna Blanca as an Important Bird Area officially. One critically endangered bird species it hosts is the white-winged nightjar, whose 2500 remaining individuals are known to breed in only two other sites. Additional biodiversity dependent upon this ecosystem is 37% of the amphibians, 33% of the butterflies, 45% of the emperor moths, and 63% of the hawk moths of Paraguay. Rancho Laguna Blanca is an excellent example of how sometimes, great things do indeed come in small packages.

Para La Tierra, in collaboration with the Duarte family, owners of this property, engaged in admirable, committed conservation efforts conducting scientific research, environmental education programs for tourists and local residents, and funded social projects in adjacent communities to foster pride in and income from the reserve’s natural treasures. But, sadly, the Reserva Natural designation expired in 2015 as it was only for a five year period. The Duarte family soon thereafter put the property up for sale, and the tourism operations closed in October 2016, although a neighboring property continues to operate as such.

This region of the world is aptly described as an agricultural matrix constantly being altered, primarily by the production of soy and cattle and by dramatic increases in rural human populations in many areas. Yet South America, in general, is also renowned for the biodiversity it hosts. Even though the vast majority of the attention is unfortunately heavily focused only on the Amazon rainforest instead of these other unique, vital areas that also have much to offer.

Another common theme in the news is people wanting to save nature, wanting to inherently value the flora and fauna of the world. Supposedly.   Some commenters on online conservation discussion pages even purport that there should be some sort of global financial contributions from the world’s citizens to protect the earth’s treasures. And various governments around the globe are pushing for certain percentages of places to be set aside for nature.

But who will pay the price that is necessary to do that? Rancho Laguna Blanca is a perfect example of this question. It has been on the market for seven years now, with a price tag of USD 5 million. If biodiversity is indeed an important priority in conservation, why has no one been effectively willing to collaborate with a group like Para La Tierra to purchase and protect this place? A place that is of such conservation significance can rightfully be considered a national as well as a global priority.   Hopefully, earnestly, a buyer will soon emerge who is willing to commit to protecting this remarkable, vulnerable, critical biodiversity hotspot.   Otherwise, if it is bought by someone whose priority is not the conservation of nature, the flora and fauna of this exceptional, biodiverse place will pay the ultimate price.